The Philippines Stands Up To China 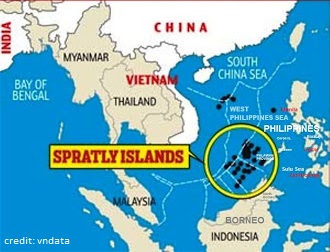 Ranged against China’s economic and military might, the Philippines refused to cower and just give up what it considers as its rightful claim to the Scarborough Shoal.

A couple of weeks ago,  Albert Del Rosario, the Foreign Secretary of the Philippines, in a press conference, declared that his government is bringing to an international tribunal  its formal challenge to China’s claims to the rocky outcroppings in the West Philippine Sea.

The Philippines for so long have tried in vain to exhaust all political and diplomatic means  in order to resolve the problem. Del Rosario revealed in the said  press conference that such efforts began as far back as 1995.  China, through its Ambassador to the Philippines, Ma Keqing, was formally informed of the move by the  Philippine government  to contest  China’s claims by seeking arbitration through a tribunal governed by the 1982 United Nations  Convention of the Law of the Sea.

The “Shoal of Contention”

The Scarborough shoal, called Panatag and Bajo De Masinloc by the Filipinos and Huangyan by the Chinese, is a disputed territory  claimed not only by China and the Philippines, but also by Taiwan.  Taiwan, however, seems to be a passive claimant. Only the Philippines and China are actively pursuing their claims. China, also was seemingly disinterested about  the shoal during the early part of the 20th century. China started asserting its claim of sovereignty over the shoal conspicuously after the departure of the US Navy force from its naval base in Subic, Zambales, Philippines

Named after tea-trade ship of the East India Company wrecked by the rocks in the area, the shoal is a triangular-shaped island group of 150 square kilometers.  Aside from being a rich fishing ground, the uninhabited rocky outcrops  are very rich in natural gas and minerals. Most importantly, beneath the shoal is a huge oil deposit.

With the oil wells in the Middle East eventually getting depleted, China, with its huge population that must be fed and industries dependent on oil, must ensure that they would have  their energy source somewhere else. Food security and source of energy are paramount concerns in the world, especially in China. Thus, it is believed that they will not give up their claims on any disputed territories in the South China Sea, the Scarborough Shoal included.  It is even surmised that should the United Nations rule in favor of the Philippines when the arbitration will be done, Beijing may simply ignore it.

What appeared to be a peaceful co-existence between the claimants to the disputed territory turned sour when Philippine sailors confronted Chinese fishermen. This resulted to a standoff.

The impasse started in April 8 last year when a Philippine navy surveillance plane spotted Chinese fishing vessels in a lagoon at the Scarborough Shoal. The Chinese fishermen were reportedly engaged in illegal fishing  and harvesting of endangered marine species.  This was confirmed when Filipino sailors from a Philippine warship boarded the Chinese vessels for an inspection and discovered large amounts of illegally collected sea products. However, when the Filipino sailors started to arrest the Chinese fishermen two Chinese maritime surveillance ships approached and prevented the arrest.

What happened thereafter was a series of incidents that tested the wills of the contending parties. This seemed to be a violation of the code of conduct that China and the Philippines signed in 1995 where both parties pledged to solve their disputes over the island through peaceful means. Series of talks even followed thereafter  in order to avoid disagreements. All went to naught with these dire developments.

Four days later, on April 12, the Philippine warship withdrew from the area in order to replenish fuel and food provisions.

From then on Filipino fishermen were not allowed to fish in the area.

In the height of the standoff, the number of Chinese vessels in the area reached 30 as against 2 from the Philippines.  When finally the Chinese fishing vessels left the  area, the Chinese fishermen roped off the mouth of the lagoon  in order to prevent Filipino fishermen  from entering the shoal.

The United Nations Convention on the Law of the Sea  (UNCLOS) prescribes an  exclusive economic zone (EEZ). It provides that a country has special rights over the exploration and utilization of marine resources.

The convention, as provided in its constitution was prompted by the desire to settle, in a spirit of mutual understanding and cooperation, all issues relating to the laws of the sea. This  is to ensure the maintenance of  peace, justice and progress for all peoples of the world.

The EEZ stretches from the shoreline of a particular country’s territorial sea extending to 200 nautical miles from its coast.

Officials from the Philippine government maintain that even in the absence of arbitration  it could clearly be seen  that the Panatag Shoal belongs to the Filipinos  for it is located 124 nautical miles off  Zambales in the Philippines (well within the country’s EEZ). Conversely, the distance between the shoal  and Hainan island, the nearest port in China is 550 nautical miles. However, the Chinese government warned that it will not abide by the results of the arbitration citing that matters like this could be settled bilaterally.

The Department of Foreign Affairs in the Philippines noted that in the case of its claim on Scarborough Shoal China, through its actions and pronouncements, would not submit to the provisions of  the UNCLOS. Ironically, in its dispute with Japan over some inhabited islands in the East China sea, China expressed its intention to seek arbitration through the UNCLOS.

China is seemingly threading different approaches in its foreign policy. When dealing with a country like Japan which  is known to have a reputable military capability, China would seek arbirtation. But with a country like the Philippines whose most modern warship is a second-hand sea vessel used formerly by the US Navy it flexes its muscle like a big kid bullying a small toddler in school.

A curious by-stander in the sidelines is the United States of America who may come to the succor of  its long-time ally, the Philippines, in case of military conflict.

But by all means that this row between Philippines and China be resolved diplomatically and that existing laws that the community of nations promised to uphold, such as the UNCLOS, be adhered to.