TRANSMOGRIFICATIONS IN THE THE FOREST After contemplating about the latest events in the forest, when the animals scored a big victory for them, the ram realized that he must also explain something to the monkey. Immediately that he went to the monkey’s den.

The sun was already down at that time and darkness was beginning to swallow the forest. The monkey was all smiles when he saw the ram coming. He seemed so excited to see the him. From the distance the ram could feel the sincerity of the smiles of the monkey.

So surprised was the ram when he got near the monkey and was embraced so tightly by the latter. “What brought you here, it’s already dark, you should have waited for tomorrow. Anything that I can do for you?” Asked the monkey. “Come, have a seat beside me,” the monkey continued. The ram did so, he sat beside the monkey and held the latter by his hands. And when he mustered enough courage, ”I need to explain something, I guess I have wrongly attributed to you something wrong that the hippopotamus has done, and it was so stupid of me not to have verified first” said the ram. “No need for that, let’s forget about whatever happened in the past, let’s just help one another now in making this forest a better place for all animals. You see, I truly am very sorry for whatever I have done in the past. Let’s start on a clean slate. The Almighty One I am sure will guide us.”

After saying that, a light of different colors came out of heaven and moved towards the monkey. The light began to engulf the monkey. But it seems that the monkey was not aware of what was happening, it was only the ram who could see it. “Oh, why are you looking at me that way. Anything wrong?” Inquired the monkey. The lights suddenly went intense, the monkey lost his consciousness and was lifted by the lights up in the air. The ram could not bear the intensity of the lights, he closed his eyes and waited for what may happen. He could even hear singing voices from afar.

Then the lights disappeared, the voices were gone as well. The ram slowly opened his eyes and was surprised to see a different animal, not a monkey, but a golden deer. The ram was momentarily speechless. After a minute or two, when he regained composure, the ram asked, “Where’s the monkey, how come you are now a golden deer?” “Come on ram , I am the monkey, what golden deer are you talking about?”

The ram realized that the monkey did not know what happened. The latter still felt and thought that he was a still a monkey but clearly, the ram was seeing a golden deer.

The ram embraced the golden deer. They chatted a little more. After a few minutes the ram decided to leave happy that he was able to do what he ought to. “Be careful, a wolf or a mad dog may tear you apart and make you dinner! Good night!” Said the monkey.

The night was already brightened up by the full moon. As he walked away from the golden deer, the ram was still in a state of disbelief about what he witnessed earlier. He was sure the animals in the forest will not believe it if he would tell them.

The ram passed by the hippopotamus’ swamp, he saw there the bloated animal lazing. He was careful not to be noticed by the hippopotamus as he walked. Then suddenly he heard a loud booming sound coming from up high. The ram witnessed how from the sky black clouds descended and engulfed the frightened hippopotamus. Then there was total darkness, the moon suddenly disappeared. He could see nothing although he could hear the growls of the bloated animal. 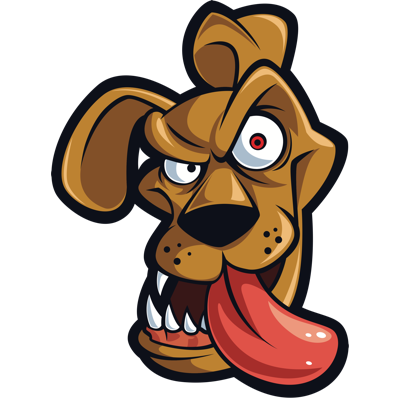 After a few seconds, the moon reappeared and the ram could again clearly see the swamp from where he was. He searched for the hippopotamus but the latter was nowhere to be found. What he saw there instead was a big mad dog.

The ram stood frozen in disbelief. He just witnessed another transformation, a bizarre one.

Then the big mad dog started to bark aloud and ululate. He seemed so happy with his transformation. The ram silently withdrew from the swamp, he was afraid that because the hippopotamus became a mad dog, the latter may be able to smell his presence in the area. But too late, the hippopotamus turned mad dog indeed sensed his presence and started to move toward the direction of the ram.

The ram knew he was being tailed, he ran as fast as he could. But his speed was no match against that of the mad dog. After a few minutes of trying to outrun the faster dog, he stopped and faced his pursuer squarely. The mad dog stopped momentarily and said, “It’s payback time, when I was still a hippopotamus you criticized me so severely. There’s nobody here to help you now, it’s just you and me, prepare to face your death. Nobody would know, you are about to disappear from the face of this forest, I will leave no trace of you, I will eat even your bones, swallow all your hair and lick every drop of your blood!” The dog jumped towards the ram. The ram saw the razor-sharp fangs of the mad dog about to be buried on his helpless neck. The ram just closed his eyes and waited for his fate to unfold.

Then the goat suddenly appeared, “Hey, sheep wake up. You are dreaming, you are screaming ?” The ram jumped up and looked around, “Where’s the mad dog? ” he asked. “What mad dog? You are just dreaming. Aha, you probably dreamt about the hippopotamus who is currently acting like a mad dog.” The goat said sarcastically. “Hey ram, go back to sleep now. I just want to remind you about your promise that tomorrow you will apologize to the monkey with a golden heart.” “Did you say golden deer?” The goat replied, “Are you deaf? I said monkey with a golden heart, not golden deer.”

Chapter 11 – The Flummoxed and Distressed Ram