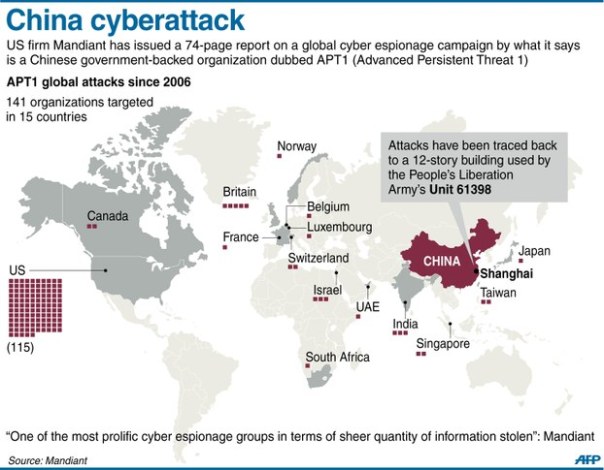 The Chinese government vehemently denied the accusations made on February 18  by Mandiant, a Virginia-based cybersecurity firm, that their military is involved in hacking activities directed against the U.S. Additionally, China claimed that they themselves are victims.

In the said report, Mandiant specifically identified the exact location where the said illegal activities   are being performed – in a building on Datong Road in the Zhabei District in Shanghai, China. The building is also identified as a headquarter of a secret wing of the People’s Liberation Army.

An  officer of China’s Ministry of National Defense, Geng Yansheng,  dismissed the charges saying that they are groundless both in fact and in legal basis.  Tracking of  IP addresses to establish their guilt is not accurate. Yansheng added that the legal community has yet to establish an internationally clear and unified definition of what constitutes a “hacking attack.”

The Mandiant report indicated that the primary victims of the hackers from China are organizations in English-speaking countries. It was noted that 115 of the 141 attacks  they observed targeted organizations in the U.S.

The U.S. is known to be the preferred target of terrorists since time immemorial. Now, it has become the primary target  as well of cyberespiognage. Officers in the White House  made an assurance  that it is acting to counter the threats. They know the kind of risk that cyberespionage may brought upon them.

Officials of the White House revealed that the U.S. will lay out a new plan  that suggests initial, more-aggressive steps against this illegal activity.

Scott Nueman claimed that The Pentagon would dramatically expand its Cyber Command for the purpose of defending U.S. interests against attacks in Cyberspace and would, if necessary, wage offensive operations.

Nueman’s also added that President Obama issued an executive order aimed at improving cybersecurity of critical infrastructure in the U.S.

Similar Reports of Hacking by China in the Past

This  was not the first time that China was accused of either cybertheft or cyberespionage. The accusation hurled by the cybersecurity firm Mandiant against the Chinese military was definitely not  the first of its kind.

In June 15, 2011 Robert Johnson of the Business Insider said that “China is systematically hacking into US networks, stealing source code, research, manufacturing advancements and government plans.” He singled out as most disturbing the attacks made in 2009 when Chinese hackers were able to access U.S. electrical grid and installed a system of “back doors” that would allow intruders to regain access at any time.

Johnson then quoted US national security specialist Richard Clark  as saying that “the attacks of Chinese hackers have been happening for years and that they’re getting nastier.”

FoxNews in October 1, 2012 published  the report of Jane Winter and Jeremy Kaplan saying that Washington confirmed  Chinese hack attacks on Whiite House computers. The story indicated a partial confirmation made by White House sources that Chinese hackers breached U.S. government computers reportedly including those used by the military for nuclear commands.

An unnamed official from the White House considered the cyberbreach aforementioned as one of Beijing’s most brazen cyberattacks against the U.S.

China  is not the only country involved in such activities. There are thousands of hackers in different parts of the world. These hackers may be working on their own or are being sponsored by their respective governments.  They do hacking for different reasons.

But the Chinese are considered as a different breed of hackers.

Tony Capaccio,  in his article published in Bloomberg on November 5, 2012,  cited a draft of an annual report mandated by Congress saying that “China is considered as the most threatening actor in cyberspace as its intelligence agencies and hackers use increasingly sophisticated techniques to gain access to U.S. military computers and defense contractors.”

The Chinese are said to be relentless in their efforts to blind or disrupt U.S. intelligence and communication satellites, weapons targeting systems, and navigation computers.

Who really are these hackers?  What do they want?

The foregoing are the questions that Bruce Schneier answered when he examined these Chinese hackers. He discovered that contrary to what has been coming out in the media, these hacker groups seem not to be working  for the Chinese government, not coordinated by the Chinese military. The hackers are basically young, male, patriotic Chinese citizens just wanting to demonstrate that they are as good as everyone else.

The hackers, Schneier pointed out, are doing it for two reasons: fame and glory, and an attempt to make a living. The source of the fame and glory is their nationalistic goals – to uphold the  country’s honor against anti-Chinese forces. Conversely, the money   comes from sources like selling computers, malware services, and different merchandises.

Chinese officials are definitely aware of the existence of this pool of hackers and who their leaders are. But Scheier contended that the officials from Beijing “choose to look the other way.” He also surmised that stolen intelligence may have been bought from these hackers who have become more sophisticated in both tools and techniques through the years.