Till We “MEAT” Again

One Korean beef dish that reminds me so much of our own “nilagang baka” (Filipino beef stew with clear broth) is 갈비탕 (galbitang/kalbitang). (I had to tell my Filipino friends in the Filipino version of this article that G and K in Hanguel are used interchangeably thus kimchi when written in Romanized form could also be gimchi.)

Kalbi, in English, is short ribs. When Filipinos cook beef stew, it’s also the ribs of the cow they choose. But while in the Philippines we add Chinese chard, potato, cabbage and saba (a banana variety used primarily for cooking), with kalbitang, added are radish, enoki mushrooms dangmyeon (starch noodles) and onions. In a restaurant, I was once served kalbitang with egg. I was also told that it can also be cooked with kimchi. That I have not tried yet.

Tang means soup. Synonymous to tang is another Korean word – guk. Thus, if at the end of the name of a certain Korean dish there’s either tang or guk, expect that the meat is cooked with soup. 삼계탕 (samgyetang) for example is soupy chicken dish. It is comparable to the Filipinos’ tinolang manok (chicken stew) which is cooked with either green papaya or chayote and ginger. What primarily goes with samgyetang when prepared are red dates, ginseng, onion,  and garlic.

Another Korean meat dish that has striking similarities with another famous Filipino food is 설렁탕 (seolleongtang). For kalbitang, the part of the cow used are the ribs but for this dish called ox-bone soup in English it’s the leg bones. Usually prepared with spring onions only but one time I have tried one with radish and thin wheat flour noodles. It’s similar to Philippines’ bulalo (beef marrow stew.)

What about pork dishes?

I’m familiar with two… one of which is actually my favorite. These two Korean pork dishes is not like any of the pork dishes I got accustomed to in the Philippines. They are uniquely Korean. 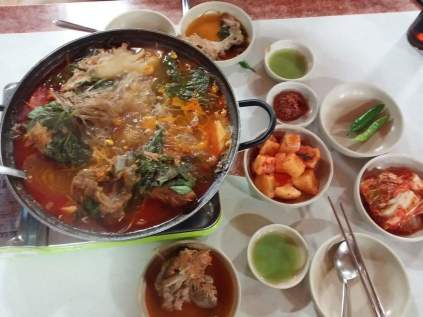 The first one is 감자탕 (gamjatang). It’s pork neck bones that are used to make this Korean meat dish and usually cooked with potatoes (primarily) and other vegetables. There seems to be a disagreement among Korean food experts as to what gamja in gamjatang refers to – is it the potato or meat around the pork spines bones? So, it’s not settled yet as to how should it be called in English – spicy pork bone stew or potato stew. For the meantime, forget about the name. Just enjoy the taste.

The second and last pork dish… and the last among the Korean meat dishes I wish to feature in this article but not the least because it’s actually my favorite meat dish here… is 뼈해장국  (ppyeo haejangguk). 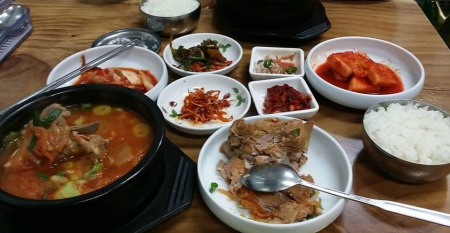 Others would simply call it haejangguk, which means, according to existing literature, hang-over soup. I’m more used to calling it ppyeo haejangguk for that’s how it’s written in the menus of restaurant where I ate them. One thing that I have noticed is that it is somewhat similar to gamjatang minus the potatoes. Both are spicy but when you order you can request that it be made less spicy or not spicy at all. I was told that there is a variety of haejangguk where instead of pork spine it’s ox-bone that is used.

Of all the meat dishes I tried here in South Korea, ppyeo haejangguk is my favorite. It doesn’t mean though that I need to eat it often because of hang-over. I just love the taste and the spiciness of this meat dish. The price ranges from 5,000 KRW to 7,000 KRW. 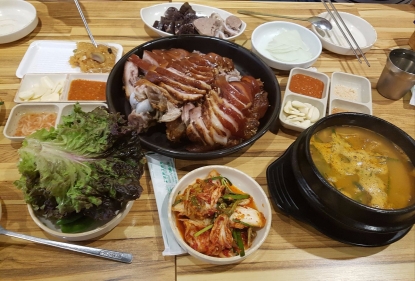 There are more meat dishes here in South Korea  but the five I presented here are the top 5 in my list. It is very possible that after my 5 years being here I may have not tried some them yet.

I wrote an article in Filipino about Korean meat dishes in order for my friends in the Philippines to know the different ways Koreans cook meat. This is the English version of the said article. The beef, pork and chicken dishes I mentioned in that write-up were limited to the ones that I already tried. I focused mainly on what I literally saw on the bowls and plates when I ate them… like what kind of meat were they, which  parts of the cow, chicken or pig were used, and what vegetables and other ingredients were mixed. I added some personal observations.