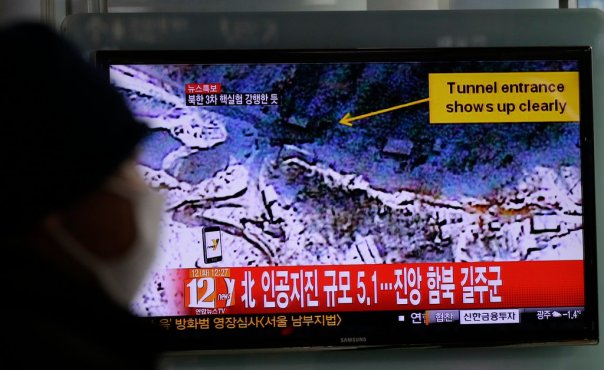 Two months after successfully launching an intercontinental ballistic missile, North Korea conducted a nuclear test two days ago notwithstanding threats of condemnation from the international community and further sanctions from the  UN .

This marks the third time that North Korea exploded a nuclear device ending weeks of speculations as to whether the isolationist Communist country would really do it or not.  There were reports saying that South Korea, Japan and the US detected a magnitude 5.1 earthquake that took place about 235 miles northeast of the capital of Pyongyang. It was suspected that the tremor was  a result of  a nuclear explosion. A few hours thereafter, North Korea confirmed through local television that indeed they have conducted a nuclear test and claimed that it was successful.

The nuclear weapons program of North Korea is said to have started in the 1980’s. It should be noted that in the past six years North Korea was very aggressive in the pursuance of their nuclear ambitions. After their surprising rocket launch in 1998,  there have been four rocket launches and three nuclear tests from 2006 to present.

They have been very active in the past 11 months that they were able to launch two rockets and conduct one nuclear test.

In the past years, the North Koreans have displayed consistency in their attempt to develop weapons of mass destruction The successes achieved by North Korea in their most recent  rocket launch and nuclear testing  have slowly strengthened Kim Jong Un’s hold to power.  But more than that is the fact that the seemingly enduring resolve of the leaders of the isolationist country to develop nuclear weapons has created instability in Northeast Asia.

With the belligerence displayed by North Korea, the United States of America and the neighboring countries of the Communist state are carefully watching.  South Korea and Japan , both allies of the United States, are assessing the developments and maintain vigilance.

In the past,  the world would either dismiss or laugh off at North Korea’s nuclear program. Now they are paying attention. Even if the nuclear device exploded by the North Korean military was just roughly equivalent to the bomb dropped by the Americans in Hiroshima during the Second World War, the damage it can wrought would be staggering. In Hiroshima, the estimated death toll during  the actual explosion and a few months thereafter was approximately 140,000.

Seemingly, no amount of rhetoric and threats of economic sanctions could dissuade North Korea from pursuing its nuclear program. And if no matter how slow they can improve their nuclear capability, imagine the kind of developments they can achieve in a decade.

Nowadays, the North Korean government can cause panic in Northeast Asia. In a few years, they may trouble  the whole world, if they would attain more success in their nuclear program.

The reaction of Ban Ki-moon, the UN general secretary, epitomizes how the world felt about the defiance of the authorities in Pyongyang to international calls that they abandon the planned nuclear testing. The general secretary said that it was “deplorable” and it gravely violated existing UN Security Council resolutions.

No countries  could be (and should be) more than alarmed but South Korea and Japan.

The newly-elected President Park Geun-hye  of South Korea issued a statement strongly condemning North Korea’s nuclear test. He considers it as a serious threat to the peace of the Korean peninsula and the world. He added that it  hampered unification efforts between the South and North.”

Japan’s Prime Minister Shinzo considers North Korea’s  act as not only a grave threat to safety of his country but also a serious challenge against established  international laws. “Japan,”  he said, “can never tolerate it as it significantly compromise the peace and safety of Northeast Asia and the international community.”

What could be considered as the most surprising reaction came from China, North Korea’s staunchest ally and supporter. China has openly objected to the test and even went to the extent of warning the country to avoid any acts that could worsen the situation on the Korean peninsula and disturb peace and stability in Northeast Asia.

The world has reasons to worry for the latest successful missile launch and the equally successful detonation of a nuclear device indicate that North Korea gained headway with their nuclear ambitions. It is feared that sooner or later the Communist state may be able to develop a nuclear missile capable of reaching targets in the United States and some parts of Europe.

North Korea, as usual, shrugged off the international condemnation. Amid all the threats coming from different world leaders, the leaders from Pyongyang even promised to continue in launching artificial satellites and long-range rockets. It even warned of the destruction of America and its puppet army in South Korea in order to reunify Korea.

With the open defiance of North Korea to UN resolutions and its seeming disregard of economic sanctions, experts are saying that perhaps it is time to consider other options in ensuring that the nuclear ambitions of North Korea would come to an end.