I promised not to c 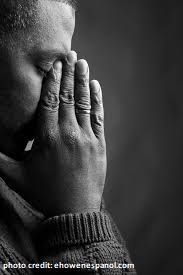 ry. That is if I could help it. But should the people notice tears cascade from my eyes…should they hear my voice crack…should I suddenly break into tears… I know they will excuse me.  I know they understand. I know that they share the grief that I and the rest of my family feel.

Now I must tell them what I need to say.

We are all grieving for in that casket lies the body of a husband, father, friend and leader. Lifeless that he is now but he remains alive in our hearts and in our minds.

Should you ask me  to extol the qualities of that man as a husband, father and friend I could tell a thousand reasons why he is so beloved. But how is he as a leader? Ask me not for I am his son, what do you expect me to say. So, be the judge.

I dare you speak in this gathering now. Tell me. Divulge in this assembly. Has he done anything that tarnished the supposedly good image of a public servant? Has he accepted any bribe from anyone of you? Have you received five hundred pesos or a thousand from him so you would write his name in the ballot? Don’t be silent. Tell me that my father lied when the night before he died he assured us that never has he committed any act that will ruin the good name of our family.

I have to admit that there were many times when I was young that I begrudged his being a leader. Why? Him wanting to serve you took away a lot of quality time from us. I’m sorry. I was selfish. I did not like to share my father’s love and attention.

I begrudged the fact that the families of my father’s fellow public servants have gone from rags to riches…instant millionaires. Their houses became bigger while we remained in the old house that my mother inherited from her parents. They have new cars while my father kept driving his old owner-type jeep. Their children graduated from prestigious universities while I had to endure the rigors of being a scholar and a working student in our state university. How I almost hated my father when he refused the offer of the university president that I become a scholar without taking any examination. He said that just like everybody else I have to go through the process. It’s a scholarship. I must have it only if I deserve it. 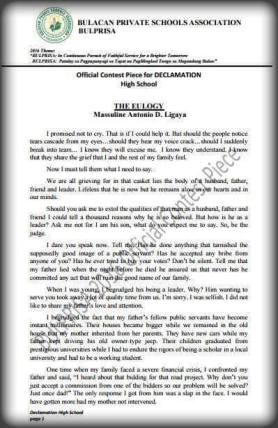 One time when my family faced a severe financial crisis, I confronted my father and said, “I heard about that bidding for that road project. Why don’t you just accept a commission from one of the bidders so our problem will be solved. Just once dad!” The only response I got from him was a slap in the face. I would have gotten more had my mother not intervened.

Then from being the head of this town your urged him to lead the whole province. He accepted the challenge. Then he rocked the boat. What he did in our town he promised to do to the province…rid it of illegal gambling, drugs and corruption…stop the quarrying being done in the mountains and rivers…bring our province back to the map of significance.

The latest surveys show him leading by a mile. His opponents got very nervous.

Then a week ago, while talking to some supporters, a visitor came to our house, a man accompanied by a slew of bodyguards. One of them was carrying a large travelling bag. He wanted us to just call him Mr. Chua. The supporters of my father went out when the talk started. I stayed. I was requested to open the travelling bag and there I saw bundles of crispy thousand bills.

“Withdraw from the race and you’ll have all of these. There’s another travelling bag in my van, if that is not enough. Refuse it and you know what will happen.” Mr. Chua said.

My father looked at me. He stood and approached Mr. Chua then slapped him. “How dare you bribe me in my house and in front of my son.”

As Mr. Chua wiped the blood from his lips he said, “You made your choice.”

The visitors left with their money.

The following day, while delivering a talk in a meeting… what I considered inevitable… what I feared was certain to happen… came to past. My father met his tragic end. A hail of bullet reportedly from two gunmen killed him.

Now we are grieving. Crying. Lost. A flock left by a shepherd.  You asked me if I could continue my father’s fight. I told you that my father asked me never to follow in his footsteps.

But for the first time in my life that I will go against my father’s desire. Forgive me father…but I feel obliged to continue what you started. They killed you but the flame of change which you kindled will not be extinguished by the bullet they sprayed on you. Your blood spilled is not a water  doused on that flame but a gasoline that will keep it burning.

My father will not bring to his grave the reforms he sought. His visions for a better life for all of us in this province will not die with him. 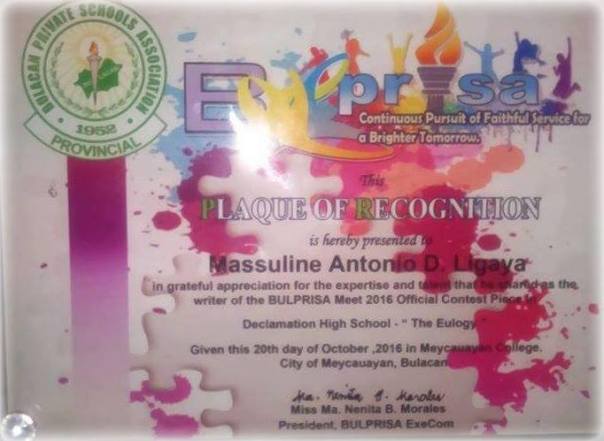 (NOTE: Used by the BULPRISA for their 2016 declamation contest – High School Level.)