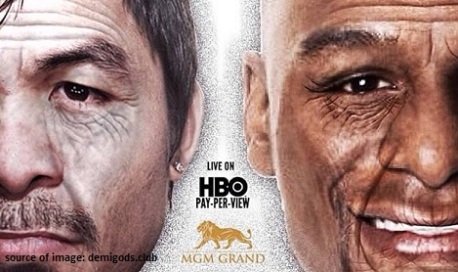 Much has been said and written about the purported fight between Floyd Mayweather and Manny Pacquiao. Both supporters and bashers of the two most popular pugilists  today agree that the match ought to happen and should have happened as early as 2010.

Unfortunately, both camps consisting of people who are  supposedly not novices when it  comes to negotiating fights, can’t (or are not willing to) strike a deal to make the fight happen. Consequently, what has been billed as a mega bout has turned into a mega wait.

The boxing fans are hoping that they will not suffer the fate of Estragon and Vladimir in Samuel Becket’s play entitled “Waiting for Godot.” In the play, the two waited in vain for Godot who never came. Are the boxing fans also waiting for naught?

The play aforementioned is considered a tragicomedy. The Floyd-Manny saga has the trimmings of a tragicomedy too.

Seeing the bout between these two ring gladiators not materializing would be tragic. A fight of this magnitude comes once in a lifetime that it is unimaginable not to see it happening.

The negotiations have seemingly been running in circles. That’s the comedy part. Representatives from both camps would point accusing fingers at each other saying that it is the stubbornness of the other party that’s preventing the fight into becoming a done deal.

The Floyd-Manny drama, just like “Waiting for Godot”, belongs to the theater of the absurd. The waiting and the blaming magnify the absurdity of the affairs between these two boxers.  Parties concerned continue to issue muddled information. Things said and done about the potential mega bout have been repetitious to the point that they now become seemingly meaningless.

It’s absurd, but not surprising, that the negotiating teams are seemingly unwilling to set aside egos and greed in order to ensure that the boxing fans get what they want and deserve.

It’s absurd to see ring gladiators instead of throwing leathers against each other in the squared arena are exchanging barbs via the social media. Boxers are supposed to exchange jabs not jibes.

It’s absurd that the fight that’s projected to earn around 200 million dollars is kept hanging in the balance. Isn’t money’s the driving force that’s fueling the boxing machinery? So, what are the promoters waiting for? Is it disagreement on how to divide the dough that’s keeping the gods of boxing from closing the deal?

“Waiting for Godot” is a two-act play. For the Floyd-Manny drama, this is already the second time that serious negotiations are being made. At the end of both acts in Samuel Becket’s play, a boy comes to inform Estragon and Vladimir that Godot wouldn’t be coming that night but the following day. In 2010, disagreements from both sides prevented what could have been the highest-grossing boxing bout from coming to fruition. It’s 2015. The Vladimirs and Estragons, the boxing fans, are hoping that a boy would be coming, not to say that Godot is not coming, but to announce that the fight of the century is finally taking place.