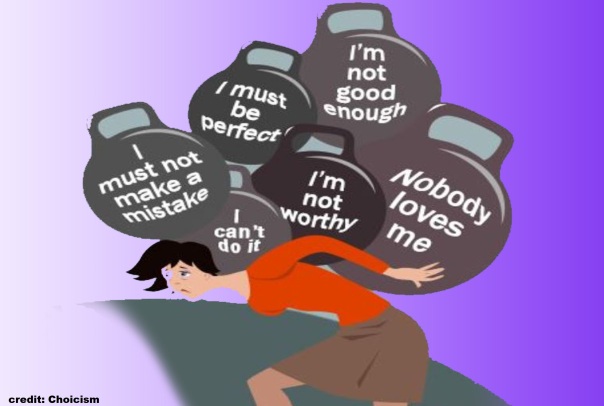 “Our doubts are traitors, and make us lose the good
we oft might win, by fearing to attempt.”
– William Shakespeare

Lust, gluttony, greed, sloth, wrath, envy and pride are referred to in Christian teachings as the “seven deadly sins.” These, to the Roman Catholics, are the cardinal sins. If a person commits any of them, he is believed to be cut off from God’s grace.

All Christian faithful are being called upon to not commit those acts of the flesh. St Paul said that believers are free but he implored them not to use their freedom to indulge the flesh. That, definitely, is easier said than done.

I think  St. Paul (who wrote the Galatians) and St. Gregory  may have overlooked another human frailty that should have been added in the list of sins. There exists another spiritual infirmity which I believe should be considered equally harmful as any of the deadly sins. It’s called self-doubt.

My proposition (that self-doubt be classified also as sin) may not be considered seriously.  Many might even say it’s preposterous.

Is self-doubt just an ordinary flaw in a person’s character? Is it really a bit too much to consider it a sin? Is it not a serious offense – something that when committed could ruin a person’s life?

Allow me to argue my assertion that self-doubt is a sin. For those who do not believe in the concept of religion, think of self-doubt not as a sin but an injury you inflict upon yourselves.

In this article, we will define self-doubt, strictly, as “the feeling of not having confidence in yourself or your abilities.”  The concept of doubt being discussed here does not refer to that philosophical function “to cast doubt.”

The definition above (the one before the disambiguation) makes self-doubt sound harmless – not something immoral or demonic that would make the moralists and bible scholars (both past and present) look at it as a sin. That’s probably the reason no religious movement, Christianity included, classified such human inadequacy as a sin. You might also refuse to accept that it is an injury you inflict upon yourself.

Self-doubt, however, is not as simple as it seems. This impotence of the human spirit has grave consequences not only to the person having it but  to the family where he belongs and to the society where he lives. A person plagued by it will be less-productive or not productive at all and is definitely not going to contribute anything for his family and society.

In arguing that self-doubt is a sin (or a self-inflicted injury) it is important to review the nature of sin in the philosophical standpoint.

“Sin is said to be a moral evil” (O’Neil, 1912). This brings us to another question – what is evil? St. Thomas defines the word (evil) as a privation of form or order or due measure. “Evil implies a deficiency in perfection.”

Self-doubt is clearly an imperfection. It indicates the absence of confidence which is considered essential for a person’s well-being and is a requirement in the pursuit of what Abraham Maslow refers to in Psychology as “self-actualization” or achieving one’s full potential. Sin is a diversion from the perceived ideal order of human living (Hyde, 2018). A person doubting his capabilities veers away from becoming the best that he can be and reduces his chance of living life to the fullest.

It could be argued that there are lot of other negative human characters that may indicate imperfections. But none is as damaging to the person as self-doubt. Something is wrong with a person if he lacks confidence and has very low (or  no) feeling of self-worth. These are conditions that  may lead to failure and unhappiness.

In addition, philosophical or moral sin is a human act not in agreement with rational nature and right reason. (Hyde, 2018).

It is not considered reasonable to doubt one’s capabilities. It is a person’s moral obligation to believe in himself. It is not right to think one would fail even without really trying. He needs to have faith not only in God (if he happens to believe in one) but also in himself.

Allowing self-doubt to reign is depriving the self of discovering one’s potentials. When a person decides to doubt himself, he eradicates his ability to fulfill his goals and to achieve his dreams.

Failures are indeed impossible not to happen. But even if one fails in several attempts to succeed he should decide not to stop trying. There’s a long list of famous personalities (like Albert Einstein, Abraham Lincoln, J.K. Rowling, Bill Gates, Walt Disney and Henry Ford) who had their share of failures but  never gave up.

But is self-doubt a self-inflicted injury?

“Sin, also, wounds the nature of man.” This is what the Catholic religion assert.

“Self-doubt destroys the heart, mind, body and soul. It is one of the major obstacles to living the life that people truly deserve. This unhealthy food for the soul drags down a person’s spirit, crushes his ambitions, and prevents him from achieving all that he can (Thalk, 2013).

Doubt impedes a person’s development. It is the biggest roadblock to self-actualization. Self-doubt prevents people from becoming the best they could be, from realizing their full potentials, and from achieving their dreams. Shakespeare stressed, “Our doubts are traitors, and make us lose the good we oft might win, by fearing to attempt.” Doubt could possibly kill more dreams than failure ever did.

Some degree of self-doubt is generally held to be normal. It can be helpful in some cases, as it often leads to introspection and enhanced performance. But it may require medical help when it becomes debilitating, affects daily function, or impedes performance at work or school (Self-doubt, n.d.).

There’s no immorality committed when one doubts himself. Why should it be then considered a sin?

This brings me to  the last among my arguments to convince you that self-doubt is a sin.

Sloth –   extreme laziness or the failure to act and utilize one’s talents –  is considered a sin of omission. I think self-doubt belongs to that category. If sloth made it to the list of the deadly sins, self-doubt should be there also.

“Self-doubt,” is just as  damaging (perhaps more damaging) to a person than this sin called “sloth.”  Actually, in some instances, a person’s failure to use his innate talents starts with his inability to believe what he is capable of doing.

I hope that the arguments I presented above about self-doubt are convincing enough that from this point on you would move as far away from it as possible.

Conquer your self-doubt and start to nurture self-belief which I think is the key component of the value system of the few men and women who scaled the heights of success.

Sins of commission vs sins of omission (2015) Retrieved from https://www.revelation.co/2015/07/21/sins-of-commission-vs-sins-of omission/