I am a foodie. The extra pounds around my waist are a testament to that. So, when I came here (South Korea) I was excited to finally try the dishes which I saw only on television shows and in movies in my country.

The first food I ate here in South Korea was… biscuits from the Philippines. Yes, that’s true. I wasn’t able to eat anything Korean immediately when I and sir Kenn (a fellow professor from the Philippines) arrived at the Busan International Airport. I was not thinking of food at that time. I was looking for at least a cup of coffee then, not because of hunger nor my usual craving for caffeine. I just wanted to feel something warm in my hands which started to go numb. It was freezing cold that morning and hunger was the least of my worries. The only thing I wanted was to reach our destination at Gyeoungju-si and wrapped myself up with the thickest of blanket I could find there.

My jacket wasn’t thick enough for my body to enjoy the early spring weather trying to give me an icy cold welcome. I didn’t have time to open my travelling bags because we had a bus to catch. It was my fault to believe what some friends back home told me that it’s not that cold here during spring. For a body used to either a hot or a VERY HOT weather, experiencing a  negative two  for the first time was literally a chilling experience.

As soon as I reached the apartment reserved for me by 경주 대학교 (Gyeoungju University), the first school where I worked here, I immediately unpacked and got myself another jacket. It was only when I was warm enough that I started to feel hungry and realized that I was actually a time zone away from my family. Back home, my wife would make sure that whenever hunger strikes there’s food I could grab from either the fridge or the table.

I waited for another day to officially get introduced to Korean dishes that I had the chance to see only on TV through the Korean dramas that Filipinos like me are so fond of watching. I found it amusing that aside from wishing me well for the Korean adventure I was about to embark on, my family and friends kept telling me that finally I would have a chance to try the legendary 김치 (kimchi).

Then finally the day came that something Korean would travel my digestive tract. I got that chance during the orientation for the university students held at the Concorde Hotel (Bomun Lake Resort, Bodeok-dong, Gyeongju-si, Gyeongsangbukdo). Of course, I was excited to meet my fellow professors from other countries and have my first encounter with Korean university students. But I was, I think, more excited to have my first dining experience in South Korea. What made it more exciting was the fact that after that night, the taste of kimchi would no longer be a mystery to me.

Right after the orientation, I joined the foreign professors and university officials and we all headed to the restaurant of the hotel. As we approached the dining hall, the ambrosial smell characteristic of hotel lobbies was replaced by a savory waft that was unlike any combination of aroma my sense of smell  was used to. It made me hungrier and more excited. 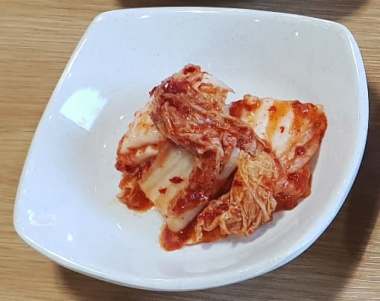 There were four of us who shared one of the tables reserved.  Already there (on the table) before we sat down were lots of 반찬 (banchan), or side dishes, mostly vegetables, including Korea’s “most-talked-about”   kimchi.

I dived in. The first Korean food I tried was (drum roll again, please)… kimchi.

Despite my struggles with the chopsticks, I managed to pick a small chunk of this famous fermented cabbage. The smell, as I expected, was biting and pungent. Its tanginess was nothing new to me because in the Philippines there are items in our cuisine that I could say are perhaps more biting and more pungent than kimchi. What about the taste? It’s garlicky, salty and of course spicy. The first one I tried then had a combination of sweetness and spiciness. I was told that there are more than 100 known varieties of kimchi.

After my first bite, I immediately wanted more of it. Yes, I came to like kimchi. I don’t know why, let me just say that it was “love at first bite.” It is so hard to explain as to why I would consider meals incomplete without a serving of this side dish.

The main meal served was a kimchi-based dish called 김치 찌개 (kimchi-jjigae).  Kimchi-jjigae is kind of stew where kimchi (preferably older or more fermented) is mixed with pork, seafood and diced tofu. I could handle spicy foods like this one. There are two problems though when I eat them. First, I sweat too much. Second and last, I probably would have up to two orders of extra rice. I was a little overweight when I came to South Korea. One of the things I set as goal when I came here was to get rid of the “belt bag.” With foods like kimchi-jjigae, I realized that night that losing weight is an impossible dream.

I completely abandoned my weight concerns when sir Randy, also a fellow professor from the Philippines, told me that the following day he would make me try 삼겹살 (samgyeobsal).