The Thanos Effect: A Review 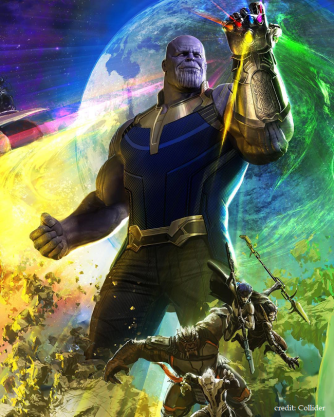 It was surprising that nobody moved from their seats when  the movie AVENGERS: INFINITY WAR ended. I wasn’t sure if they just wanted to see the post-credits scene which Marvel has been using as teasers or they could not believe how easily Thanos defeated the team of Avengers that stood on his way and turned many of them into dust after merely snapping his fingers.

I’m used to seeing a few people beginning to move to the exits of the movie theatre when the post-credits start rolling. But that time it was different. It was like Thanos applied his reality-bending power on us and welded our a – – es where we were seated.

Nobody stood. Like me, they were glued on their seats perhaps with jaws dropped  and eyes wide open not believing what just happened. They probably didn’t expect it to end the way it did. Spoilers have already warned the movie goers (who do not mind reading them) that Avengers would  die trying to prevent Thanos from getting all the infinity stones. However,  they and I never thought it would be that many.

It seemed that just like me, the moviegoers stayed for they were hoping that instead of a teaser what Marvel designed for the post-credit scene is to have everything Thanos did getting undone. Perhaps the gods and goddesses (creators) of the Marvel “movieverse” could have possibly used it as an opportunity to introduce time-travelling LORD IMMORTUS who would have moved back everything to the time that Thor attacked Thanos, tell Thor in the process to change his aim and make him target, not the titan’s chest but his arm with the gauntlet so he would not be able to put his thumb on his middle finger and do that infamous finger snap.

The post-credit scene which Marvel cruelly put at the very end was not something I hoped for though. There was no LORD IMMORTUS, not even one of the TIME-KEEPERS who may have possibly not approved of Thanos’ intentions. What we saw instead was a confirmation that Gamora’s stepfather succeeded in “murdering half of all life in the universe.”

At least those among us in the theatre that time who previously read spoilers had the idea that certain Avengers would die. But the spoiler-phobic movie fans there who may have intentionally shut themselves off any information about the movie, and might perhaps avoided watching the trailers (which I sometimes do), were gravely disappointed for perhaps they were expecting an ending similar to the first two installments of the Avengers’ series where all of their favorite characters survived (except for Quicksilver in THE AVENGERS: AGE OF ULTRON) and emerged victorious.

It was possible that  not a single one of us in the theatre was heartbroken when Loki died.  Moviegoers dislike him anyway. That’s the unfortunate role of bad dudes like him in stories – to be hated. None probably minded when after killing the Trickster Thanos said, “There would be no resurrection this time.” But I was thinking if everyone of us went back to that line and started wondering if that applies to all of the super, mighty and seemingly invincible Avengers who disappeared in thin air after Thanos made that murderous snap of his fingers.

The Winter Soldier was the first to flake into nothing. I, possibly the other moviegoers also, waited with bated breath who would go next after him.

Then one by one the other Avengers disintegrated – the Black Panther, the Scarlet Witch, and the Falcon. Those whom Thanos defeated in Titan were not spared. Dr. Strange, the Guardians – Star-Lord, Groot, Drax and Mantis were also reduced to dust.

Also killed by Thanos, aside from Loki, were  Gamora, Heimdall, and the Vision.

Disbelief engulfed probably every soul  in the movie theatre after the post-credit scene.

I am not sure If anyone of us cried. I didn’t. I was just a little bit moved when Peter Parker sobbed unabashedly clinging to dear life when it became obvious to him that he was randomly chosen in Thanos’ selective slaughter.

But the post-credit scene offered a glimmer of hope. Before Nick Fury disappeared, he successfully sent what appeared to be a distress signal to Captain Marvel paving the way for “AVENGERS 4.”

Of course, some of the Avengers, if not all, will be resurrected in the next Avengers movie. As to who among them will be brought back to life is anybody’s guess.