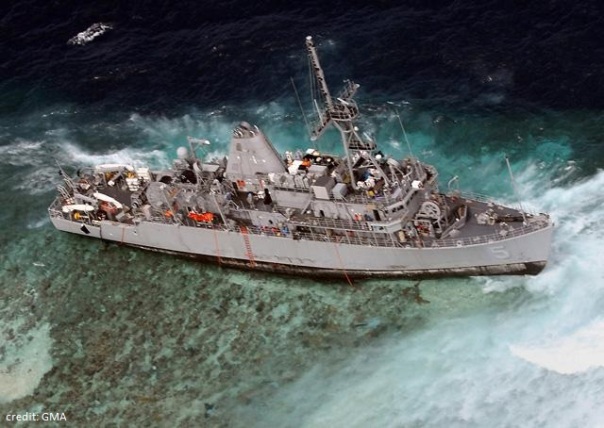 The US Navy ship USS Guardian remained stuck in the Tubbataha reef where it ran aground two weeks ago raising the possibility of the reef getting more damaged.

The mishap happened on January 17 when the aforementioned ship of the US Navy was navigating the Sulu Sea in Palawan, Philippines on its way to Indonesia after a port of call in Subic, Zambales.

The USS Guardian,  an Avenger-Class ship that is based in Sasebo, Japan is manned by a crew composed of 6 officers and 75 enlisted personnel.

Many are wondering how the incident could have happened considering the fact that it has modern navigation equipment. And more are wondering what the US Navy was doing in the territorial waters of the Philippines at that time.

The US Navy claimed that “faulty navigation chart data” caused the incident.

What made the incident catch attention was not that it was puzzling that a US Navy ship with an advance navigational equipment would figure into such a mishap but the fact that the Tubbataha reef is not an ordinary coral reef. It is a protected marine sanctuary covering around 97,030 hectare . It was declared by the UNESDCO as a world heritage site and was included in the search of the “Seven Wonders of Nature in the World.”

Immediate actions were recommended to avoid further damage to the heritage site.

The Extent of Damage

Initially, park rangers and officials estimated that out of the 97,030-hectare marine sanctuary around 1,000 to 1,600 sq. m. was affected. The damaged portion, granting that no further smash dent will be inflicted on the beleaguered coral reef, represent only a small percentage of the whole area. However, experts say that it takes 250 years for a coral to grow a meter long. Thus, when finally the grounded ship would be removed, the area that was damaged would take long to recover.

Additionally, aside from the direct damage, expected are long-term effects on the fish species that thrive on the corals.

The US Navy acknowledged their accountability and promised to cooperate with the Philippine government and pay the required compensatory damages.

Based on existing laws in the Philippines, the US Navy will be fined $300 per square meter of the area destroyed, a small amount considering the defacing that was inflicted on the coral reef and the expected long term effects.

Luckily the officials and personnel of USS Guardian were able to extract the fuel from the ship averting what could have been a disaster worse than the physical damage inflicted on the reef.

US Apology and Response

The US Navy has began investigating the incident. US lawmakers who visited Malacañang earlier in the week expressed regret over the incident.

The American government apologized for the unfortunate incident and promised to pay for all damages that the grounding of their ship inflicted on the reef. In reaction, Aquino, the Philippine President said that the apology would not exempt the US Navy from complying with Philippine laws. He said that the US Navy must explain as well why the ship went off-course.

The Philippine government would also demand its long-time ally to do whatever is necessary to rehabilitate the damaged area and to ensure that while the USS Guardian is stuck there no further damage would happen.

A salvage operation has been prepared to remove the ill-fated ship.

For the said operation the US Navy hired a Singapore-based private contractor. One of the options being considered for the removal of the ship from the coral is by lifting it with a crane and load onto a salvage barge. The worst that could happen is to cut it into pieces so the ship can be dismantled piece by piece.

The Philippine government requested that they must be informed as to how the salvage operation would be conducted by the US Navy . Local officials are demanding that the US Navy would present to them for approval the salvage plan before undertaking it.

It may take a few more days before the salvage operation begins.