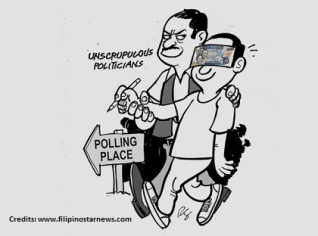 How many of the registered voters in past elections can proudly claim that not even once that they sold their votes? Hard to say so it is difficult to choose which quantifier to use at the beginning of the next paragraph. Should it be all, many, some, several or a few? Just feel free to fill-out the blank.

_____ voters expect to be paid before they go to the precincts to cast their votes. Normally, midnight before the actual election day (or the wee hours of the morning of that day).

Had this writer used all or many he may be accused of committing the fallacy of hasty generalization. Perhaps the safest to fill-out the blank with would have been some.

This is the sad reality in the country’s  electoral process. Vote buying is rampant. It usually happens in the few days leading to the election day.

Let’s paint a scenario. Say there are 3 candidates for a mayoralty race in a town or city. All of them would offer a certain amount for each voter. The highest bidder will get the vote. The first candidate may be offering the usual P500 per vote but the second candidate who may promise P1000 would be preferred of course. However, if the third candidate would be willing to give P1,500 then he gets the nod of the voters, unless on the 11th hour one of the two other candidates will offer more than what the 3rd one promised.

The voter writes in the ballot the name of the candidate who gives him more money but gets to pocket as well all the amount promised by the other candidates. The total earnings of each voter would be the sum of the amount all the candidates promised. That’s only from the mayoralty bets. What about the money coming from candidates for other positions, national and local? Just do the Math. There’s indeed much money that circulate during elections.

Usually, the campaign leaders and trusted assistants of candidates are the ones going around to distribute the payroll. Supposedly, the wheeling and dealing are done discretely. Of course, none of the incumbent local and national officials will admit that they used their millions to secure their victory in the polls. They will deny it to death but only those who were born yesterday would say that stories about vote buying are not true.

The voters selling their votes thought that they have nothing to lose but instead they have a few thousand bucks to earn from what they’re doing not realizing that governance is a serious matter that should be put in the hands of the most qualified leaders and not in the dirty fingers of the ones using money for them to ensure victory during elections. Or probably they know… they just don’t care. The few bucks they would get is all that matter.

The voters selling their votes need to realize that they indirectly contribute to corruption in the government. The scheming politicians are just more than willing to spend millions during elections but they make sure they recoup the millions they spent for paying the voters and much more by getting involved in kickbacks and shady deals while in power and by dipping their hands into the coffers of the government. Only a few of them get caught in the process because they know how to work their way around existing laws and regulations.

More often than not that voters complain about the performance of local and national leaders. They forget the maxim that says “You deserve the leaders you elect.” The electorate must always remember what Thomas Jefferson once said, “The government you elect is the government you deserve.”