ON BEING A POET 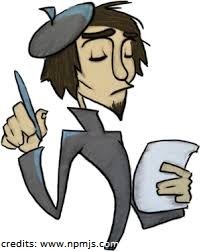 The literary genre most difficult to produce is the poem. Imagine putting together the elements of rhythm, rhyme, sound and imagery, not to mention the need to have a formidable vocabulary.

Writing stories may also have maze-like intricacies because mixing in bowl the elements of fiction within the bounds of the plot  is not a walk in the park.  But fiction writers have the luxury of using a lot of pages to serve their purpose. Leo Tolstoy needed more than half a million words for his novel “War and Peace.”

Conversely, a poet has a single page, sometimes not even the whole of it, to capture vivaciously and vividly the emotions and thoughts pervading within or around him. The Japanese, through their Haiku, would do it in a single-stanza poem with three lines consisting of a total of 17 syllables.

What adds difficulty when poets thread the rhyme zone is that they can not walk the path of sadness while wearing a smile. Neither can they frolic in the lake of happiness while riding the canoe of sadness.

Pain begets pain, joy engenders joy. This is seemingly the prevailing mood in the realm of poetry. Rare are the crying clowns who can masterfully inject sadness into the veins of their poems while they are cracking a joke.

The melancholic lyre sounds best when played by a poet who in one way or another licked some emotional wounds sometime ago in a desolate room. On the other  hand, the trumpet of merriment can best be blown by a poet who has journeyed the clouds of ecstasy.

But life is a masterful musician who teaches poets to play both the melancholic lyre and the trumpet of merriment. Life enables a poet to play any of the said instruments at a given time.

If a poet intends to paint his canvass with gloom then he can easily prick an old emotional wound until it bleeds sadness. He can walk down memory lane and revive the pains inflicted by either a person or an event he would rather forget. That’s not masochism but rather a form of sacrifice, the poet ought to feel what he intends to write.

If it is the rainbow needed in his canvass then exactly the opposite of the foregoing he must be doing.

That‘s the beauty of being a poet. Poets can switch with ease to any emotions that they desire. Like an actor in a theater, crying one moment then in a jiffy burst into laughter.

Sometimes poets get misconstrued. When a poem tackles sadness and regret for losing someone the readers would think that the poet still loves and wants that someone back. Worse, the person who felt alluded to may either be excited or feel vindicated.

Lest we forget that poets are men of arts who write for art’s sake. Undoubtedly, they draw inspiration from someone or something. They need a motivation in pursuance of their art. But as it is, the end is the art and the motivation is but the means to achieve the end.

As to whether or not a poet  who writes a poem of gloom and bewail is sad and regretful, only he knows.