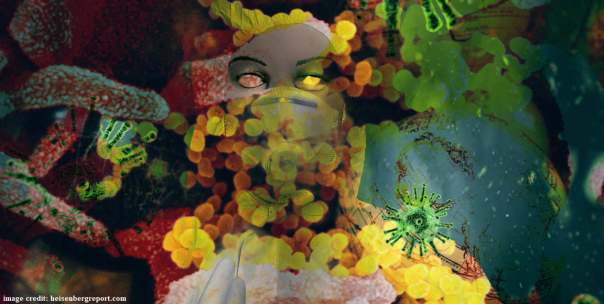 Yesterday (February 26th), on my way to Haemi-myeon, I bumped into a colleague – a foreign English professor like me. We were about to do a “fist bump” but realizing that our hands were exposed, I jokingly suggested that we do an “elbow bump” instead. He agreed and we both laughed at what we did. A “fist bump” is safer than a handshake (according to research studies) but with the dreaded COVID-19  possibly clinging in somebody else’s skin and ready to jump into ours upon contact, then the “elbow bump” is a safer alternative.

A few days earlier, I had a friend who was obviously a little bit iffy meeting me in person him knowing that I just traveled all the way from the Philippines and landed at Incheon international airport. I just could not tell him that the feeling was mutual because I was not sure where he traveled around Korea the past weeks. Even if he did not travel, I don’t know who were the people he came in contact with and were they not infected by the virus.  That day I embraced the present reality – that because of the COVID-19, people around us, colleagues or not, friends or not, loved ones or not related to us, need to take all the necessary precautions – and we should not take offense.

But we don’t need to be scared, to the point of becoming indifferent and paranoid. Neither should this COVID-19 scare drive us to racism. We just have to be cautious and cooperate with (and follow instructions given by) authorities who have been doing their best to control the contagion.

While taking my vacation in the Philippines, I closely monitored COVID-19 cases, not only there but  also here in what I consider my second home – South Korea. I flew out of South Korea through Incheon Airport on the 26th of January for my winter break and if I remember correctly, there were only around 3 confirmed cases in the country at that time. When I checked for updates on January 28th, there were already 4. Meanwhile, in the Philippines, as of the same date,  there was only one confirmed case – not a Filipino citizen though but a 38-year-old Chinese woman from the reported origin of the virus – Wuhan, China.

There are thousands of Chinese in the Philippines and nobody knows how many of them came from (or might have travelled to) Wuhan when the virus was still silently wreaking havoc. There could also be Filipinos, or foreigners, who might have traveled to China who could possibly be carrying the virus without them knowing and were roaming around my country. Scared by these possibilities, I decided to cancel a road trip I was planning to have with family and friends. Also, I intentionally did not contact friends I promised to see during my vacation. Reason – I wasn’t aware of their travel history. Better safe than sorry.   Conversely, that was also beneficial to them, I passed through two airports, Incheon and Manila, and have mingled with hundreds of foreigners in the process. I was not sure then if I did not get infected. Thankfully, I was not.

By the 30th of January, more cases of COVID-19 infections were reported here in South Korea. The following day (31st of January), when there was a dramatic increase of confirmed cases of infections, the university (where I am currently employed) cancelled the graduation ceremonies that was supposedly scheduled for February 21st. That was a very good decision. It was for the best interest of everybody that our university did so. I have several PhD students, one of them was my dissertation advisee, who were supposed to formally receive their diplomas that day. They have long waited for that to happen and they were saddened that because of the COVID -19 scare, it was cancelled. They  said that there is nothing they could do about it and besides, they themselves were also hesitant to participate in the graduation ceremonies had it pushed through as scheduled because a lot of people coming from different parts of South Korea (including those with confirmed cases of infections) would be coming and there would be a lot of foreign students (and possibly their families too) attending too, some of them coming from China.

On February 1st, there in the Philippines, the first COVID-19 death outside of China, happened. On February 5th, the third case was reported bringing the total number of confirmed infections to 3. All those reported infected were Chinese. There was no community transmission in the Philippines though. It was a different case here in South Korea where more and more cases were reported during the first week of February even among people who have no travel history to China. This prompted our university officials to move the opening of the Spring Semester to March 16th. Another wise move.

When I received the email stating that the opening of School Year- 2020 would be delayed for 2 weeks, I contemplated about extending my vacation in the Philippines so I could stay longer  with my family. But I decided not to because should the COVID-19 problem in South Korea gets worse, there was a possibility then that the Philippine government would not allow flights to and from this country, the way it did to flights to Macau, Hongkong, China, and Taiwan.

So, as scheduled, I flew back to South Korea (from the Philippines) on February 19th. The previous day, the 31st COVID-19 case was reported. When I got settled in my apartment the following day (February 20th) and checked the internet for updates on the virus, I was shocked to find out that cases of infections have breached the century mark. More infections and deaths related to the virus were reported in the next couple of days prompting me to take all the necessary precautions.

As of today (February 27th) there are already 1,766 confirmed cases of COVID-19 infections and 13 deaths here in South Korea. Reports identified Daegu City and the neighboring province of Gyeongsangbuk as the regions in South Korea that were hardest hit by the virus. The vast majority of infections took place in the said places.

I have been back here (in South Korea) for a week now but I have yet to enter our university campus. I need to complete the 14-day mandatory self-quarantine period before I do so. I am hoping that all foreigners – students and workers – who traveled overseas would do the same.

I have not ventured out of my “cave” much the past 7 days except when I had to buy food and other supplies (thrice that I have done so) and eat in a restaurant. Only twice so far that I visited my favorite restaurant. That’s how I restricted my movement  so far, not because I am scared but to ensure that I don’t get infected, or I don’t infect other people in case I am already carrying the virus and I just don’t know.

The COVID-19 scare clearly disrupted my routine. I could not go to the gym in our campus to do my regular workout. I have also avoided walking around and hiking in my favorite spots around here. For the meantime, I am making do with the stationary bike and some weights in my apartment.

Thankfully, technology can provide the entertainment I need. Even if I could not go to a nearby city (Seosan-si) to watch movies, there are plenty of them available in my favorite websites.

With me hesitant to venture beyond the door of my pad, I have more time to create contents for my website, read, write, and meditate.

As always, the Facebook messenger and Skype, allow me to be in touch with my loved ones through “video call” almost 24/7.

I am confident that humans can overcome the onslaught of the COVID-19. It’s just a matter of time. The homo sapiens is a resilient species.

God’s love and mercy towards humanity never end. Sooner or later, the COVID-19 scare will be a thing of the past.