← During the First Day of Class
Kimchitized →

My Unforgettable Stint as a “Journalist” 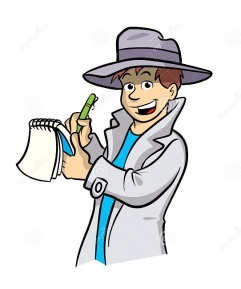 I worked  briefly (for a month) for an online news site  before I flew to South Korea to work as an English teacher in 2013. The name of the said news site was The Vincent Times (www.vincenttimes.com). In 2015, when I tried to access their website I could no longer find it. I don’t know if they closed up shop or they only changed name and web address. The name of the person who contacted me and offered me the job was Codie Vince. I don’t know if that is his real name. He said he was from New Zealand where his news organization was also based.

At that time, I was really looking for a writing job on-line because I wanted to test my mettle as a writer and, of course, earn an extra income as well. 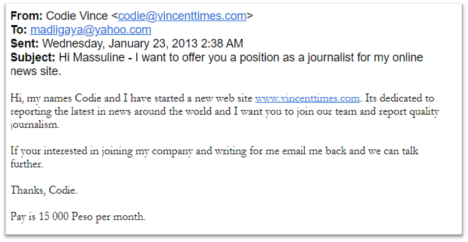 In 2011, I gave up a writing job at Academia-Research (academia-research.com) because I don’t like the scheme of needing to bid against fellow writers to get a paid writing job with the one asking for the lowest price getting it. What I thought when I joined them and had to undergo the rigorous process of passing their exams and needing to submit a sample article which should pass their standards was I would be given writing assignments by them and be receiving remunerations for my outputs.

So, when I received an offer from Mr. Vince, I accepted it. In the subject line of the e-mail (above)  it says that the position offered was as a journalist.  I said to myself, “Wow! Should I take this I’ll become a journalist.” 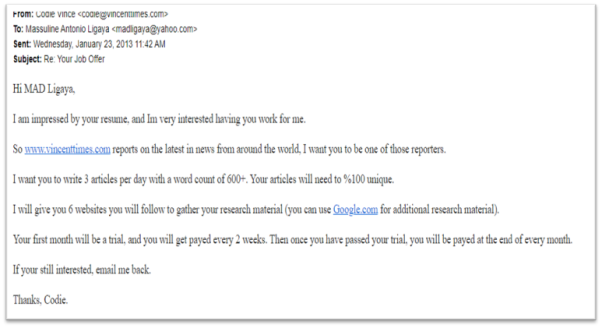 I noticed the mistakes he committed in his first two emails but I just ignored thinking that he was just careless. 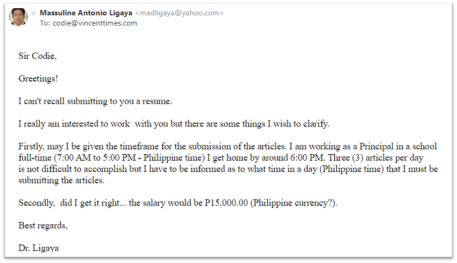 I responded to his email.

He answered all my questions and in his next email explained to me everything that I needed to do.

We exchanged some more emails before I finally started writing my first article for “The Vincent  Times.”

It was so unfortunate that that time I was at the threshold of  making a big career move – literally speaking. The university here in South Korea where I applied for a teaching job hired me. I had to resign from my job (as School Principal) and from the Philippines I flew to this country on the 2nd of March, 2013. I could not focus much on my writing weeks before I left (and even a few weeks immediately after I started working here). I had to do a lot of paperwork for my next job and had to ensure also that everything would be in order before I left the school where I was still working then.

When I accepted the job offered, I was able to produce only five articles after one week (instead of ten) and I informed Mr. Codie that I would stop writing.  He seemed to be satisfied with my outputs that he allowed me to write just five articles per week.

I wrote a total of seventeen articles for “The Vincent Times.” The last one was on February 26, 2013 – one week before I left for South Korea. I informed him that I would be busy that week so I would not be able to submit articles until I get settled in my new work place.

I wanted to write for them again but the adjustment that I had to make when I started working in South Korea – new job and new environment – had my plate full. It took a couple of months before I could go back to serious writing. 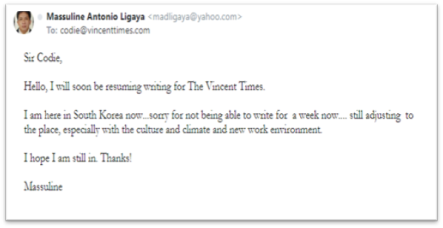 After my first week in South Korea, I tried to contact Mr. Vince through email and Skype. I did not get any response. I tried several times more thereafter but it puzzled me why he wasn’t responding.

I wrote another email telling Mr. Codie that had he actually unofficially fired me and I would no longer be writing for his online news site then at least he should pay me for the articles I have written for “The Vincent Times.”

I did not get any  response also. 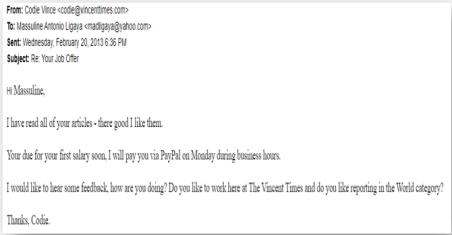 Actually, after my 10th article, I inquired as to when will I get paid. In response, he sent me the email on the left.

I don’t usually demand to be given the salary an employer promised me. I know it is something that they know when to give. That’s what honorable people do – honor their obligations at the time they ought to. It was an email coming from a concerned individual asking me if Mr. Vince paid me for the articles I have written that made me worried. That person claimed that the founder of the “The Vincent Times” did not pay him a single cent for his works. After reading Mr. Vince’s response, I decided to trust him for he seemed to me a decent and honest man. I also did what was expected of me  – write five articles every week.

Another  week passed, I wrote five more articles but my salary remained unpaid.  I decided to send him another email and here was his response.

After that I sent him details of my bank account and requested him to just transfer that amount there if he’s having difficulty with PayPal. I should be getting I guess around 100 US dollars. Not much but it feels good to receive a certain amount as a reward for your hard work.

I wrote two more articles after that. I thought he would pay me at least before I fly to South Korea. That was wishful thinking.

Whatever happened to Mr. Codie and his “The Vincent Times” and why he did not pay me for my services remain a mystery to me.

It was just a  small amount of money and I am not running after it but what I really would like to know is why Mr. Codie did what he did and am I the only one victimized by him.

Another question is “Are there other news sites (and similar organizations) like “The Vincent Times” victimizing writers asking them to write and promising them pay which they would never give?”

My brief stint as a news writer was indeed frustrating because I thought I was dealing with a decent and honest person. I was duped by Codie Vince. However, I still consider it an unforgettable experience because during those nights that I had to finish those articles I gained so much experience as a writer and learned more about my capabilities as a person. I may have not received the salary that was promised but the boost it gave to my self-confidence is simply priceless.

You can read here  the articles I wrote for the  now defunct “The Vincent Times.”

← During the First Day of Class
Kimchitized →