The Different Animals in the Workplace 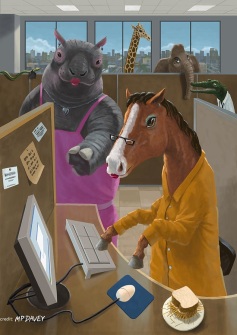 I couldn’t agree more whenever people describe the workplace as  “a jungle.” I have worked long enough – thirty years in 8 different institutions in 2 countries – that I have enough reasons to concur  with that description. There are uncanny similarities in the behavior of people inhabiting the working environment and the animals in the forest. Even the patterns of relationships between people in the field of work resembles the way the living creatures in the wild treat each other. Thus, they say, in the workplace “only the fittest survive.”

I have been in this jungle called workplace for three decades now. Here I am, still standing and breathing. I managed to hold my own against the different animals I encountered in my journey. I experienced being stared down by a lion, stalked by an eagle, bitten by a snake, and clipped by a crab.  I survived.

How did I do it? How did I live to tell the tale?

I simply took a cue from Charles Darwin. He theorized that “species with useful adaptations to the environment are more likely to survive.” That exactly is what I have been doing (and what you should do also) – ADAPT.

If you wish not to be dinner for the predators it would behoove you  to study carefully the environment of the workplace where you belong. Know what kind of animals you are dealing with. Study them carefully. You also need to put your survival instincts into full gear.

Predators lurk in the shadows. It could be a big cat hiding in the bushes or   a mighty bird hovering above. These predators could the “people upstairs” or somebody from among you “downstairs.”

Don’t get me wrong. I don’t mean that all bosses succeed in their business endeavors  at the expense of the people in the rank and file – like predators slaying their preys and eat them. Perhaps a majority  of them (I hope) consider themselves rhinos and the people they hire oxpeckers whom they allow to freely land on their backs to feast on the insects pestering them.  The point I wish to drive at when I argued they (the bosses) are predators is that they are on the top of the food chain and like it or not you’re on their territory. They dictate the terms and conditions of your employment. That doesn’t sound good but it’s the reality in the workplace.

The ones who own or manage the workplace  are the alpha males. You need to have a full understanding of how they think and operate. Better if you could dig deeper and try to know what they like and dislike. If it is not too much for your dignity (or should we say EGO) to adapt to their whims and fancies then stay in the pack. You could flop onto your back, not necessarily to submit but to submit to the alpha males.

If not, if your ego clashes with theirs, the wisest thing to do is find another pack.

Believe me, you cannot afford to take too much bravado and think you are that brave “angry bird” who would tweet your disagreement  and not expect  dire consequences. Your chirps will not go unnoticed and before you know it the eagle will swoop down on your nest and tear you apart with its powerful beaks.

More often than not, or almost always, that locking horns with the “powers that be” in the workplace is like Don Quixote fighting the windmills.  It’s a losing proposition.

Of course not all bosses are saints. Some of them would take advantage of the people they hire in different ways. That you’d discover (hopefully) in time. So, why stay on a watering hole when you discover that there are crocodiles under the mud waiting in ambush?

What about  the predators among you “downstairs”.

Wherever you work, you’ll encounter malevolent individuals. So, be careful. Beware of the wolf in sheep’s clothing. These are co-workers who camouflage themselves as your friends. Thinking that they are, you share with them your darkest secrets. Later you’ll just discover that the entire workplace is talking about the skeletons you’re keeping in your closet.

Let’s talk more about the different animals in the workplace. You’ve got to be able to identify them if you really want to survive the wild called workplace.

We have already mentioned about the monkey at the top of the tree, the big cats and the mighty birds. Yeah… including the wolves pretending to be sheep.

Are there other animals you ought to be wary of?

Among your co-workers spot the crabs.

Do you know what happens when you put crabs in a bucket? They’ll try to escape by pulling back down others effectively preventing anyone of them from climbing out of the bucket.

That’s the origin of the proverbial “crab mentality.” The philosophy of the malevolent among your co-workers is “if they can’t have a promotion or an incentive, neither can you.” Some people in workplaces just don’t want to see their co-workers succeeding. They so hate it when somebody climbs up the ladder especially if they’ve been there longer. These are the snakes who would bite you with intrigues and gossips when they  see you work harder that they do. They would accuse you of being a leech trying to suck the attention and favor of the people upstairs.

Don’t allow the venom of the snakes get through your nerves. Continue to work as hard as your personal values would allow you. That’s just the reality in the workplace – that generally there are two types of workers – the ants and the termites.

And with who would you rather be associated – with the ants in the workplace who keep themselves busy working and helping one another in order to achieve the goals of the organization or with the termites, whose actions and pronouncements, deliberate or otherwise, are damaging – not only to the organization but more so to themselves?

They are basically a negative bunch that should be avoided at all cost. The termites hold a grudge against the people upstairs for one reason or another and they think that by not doing  their jobs the way they ought to and by behaving oddly they could get even. They spin tales about the current state of the organization basically for the purpose of demotivating people. Be aware that the termites could also sow dissension among their co-workers.

Nonetheless, the people upstairs are not naïve. They could easily detect the existence of termites and they get them exterminated.

Watch out also for the parasites in the workplace.

The parasites seem to have special training in detecting generosity. Once they have spotted a kind-hearted co-worker who wouldn’t say no when asked for favors then they will have a field day.  They would ask you to solve their work-related problems and sometimes even seek personal favors.

So, be careful. Learn to say no when you have to or else they would eat up your time and resources. They would not hesitate to abuse you.

It’s okay if they return the favor. The problem is the word “reciprocate” is not in their vocabulary.

They also tend to exhibit that selfish attribute in their work. You could neither expect them to walk an extra mile for the organization nor perform their duties and responsibilities as stipulated in their contracts. They care for nothing but their salaries.

For the workplace to prosper, the relationship between the people and the organization should be symbiotic.

You can choose between becoming a parasite or a clownfish.

The workplace gives you a venue for professional growth and a source of livelihood. You need to keep it afloat. Your organization needs your help for it to succeed and continue existence. You may have disagreements with the people upstairs but you need to bear in mind that commitment to job and organization is different from commitment to your employers.

Lastly, in order to survive in the forest, you need to clearly determine where you rank in the food chain. Identify the different kinds of animals there. And most importantly – don’t stand in the path of your predators.

It’s as simple as knowing your designated place in the organization, being mindful of your words and actions, and being careful with how you deal with everyone. And remember that the most foolish thing to do is to offend your employers.

You have to study the culture of the workplace. Again… ADAPT. Remember what Charles Darwin said, “It’s not the strongest  species that survive, nor the most intelligent, but the ones most responsive to change.

If you can’t adapt, it’s time to migrate to another forest.

via The Different Animals in the Workplace