“Life is like a roller coaster ride.” I couldn’t agree more to whoever said that.

Yesterday, you saw people beaming with so much happiness laughing so contagiously and shaking hands or exchanging high fives with everybody around them. Today, the same people  maybe crying a river in a desolate room smarting from the pains inflicted by something or someone. Tomorrow, what will it be? Nobody knows! They would have licked their emotional wounds and will emerge from that desolate room, learn to smile again and gradually laugh their way out of whatever bad experiences they had. If not, then we could surmise that they may have decided to stay in the shell of their grief and to plummet deeper in the unfathomable depths of despair.

Perhaps everything may depend on whatever twists and turns that were laid down by the grand designer of the tracks where our personal roller coasters run. We may desire all that we want to alter the course of our roller coasters and wriggle out of the undesirable whirls in the switchbacking tracks. But that’s impossible.

Eventually at a certain age, whether we like it or not, we begin to take control of our lives. That’s when the ride starts. Choose a car in the coaster train. There’s no turning back. All that we can do is to make sure that we’re buckled up. Expect the turns, ups and downs. Be ready to be  twizzled and twined. Accept that you could not avoid the spirals and the slammers.

Generally, the way my roller coaster zipped through the tracks have both enthralled and frightened me. There were times, when I was younger, that  I wished the joy I was experiencing wouldn’t end. There were moments also when I thought I would not be able to wiggle out of the depths of despair and sadness but my faith in God (that I believe exists) and my unwillingness to succumb to challenges kept me afloat.

One of the most difficult parts of my journey in the tracks happened a few days ago. (I wrote this in 2009, just two weeks after IT happened.) Those days in my life were both exciting and frightening. Perhaps that stage of my ongoing roller coaster ride – that chapter in my life – could have been the most emotionally draining and exhilaratingly suspenseful.

It happened when an angel dropped from the clouds  and gave me the privilege of becoming his father (and my wife his mother) for seven days. That’s right – seven days only. I wanted it longer. But from up there in the roller coaster tracks where my car was (and up there I felt enormous joy). I was pulled down. That was a very steep slope. Then I felt passing through a twist and a turn and when my roller coaster made a sudden stop – the angel was gone.

What happened in those seven days? 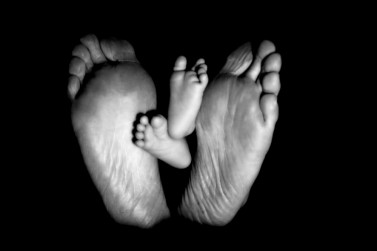 Yes, an angel came from heaven, transmogrified himself into a baby boy and presented himself to someone I would just refer to as ate* (a–te) Baby.

That Tuesday morning, while I was preparing for work, ate Baby came. Even without me seeing the one calling out my name from outside of our house, I was pretty sure it was her. That bass booming voice was so familiar.

As I opened the front door leading to our terrace,  what greeted me was like a scene from a movie – an old frowzy woman standing cleaving to a new-born infant slovenly swathed in an old blanket. She inquired if I still wanted to adopt a child and entreated me to get the baby she was clutching.

Of course, I and my wife wanted so badly to have a son or a daughter. We have yet to have one at that time. We wanted so badly to hear in that house the  reverberating cries and the timorous laughter of an infant. But that notwithstanding, I just could not grab that lovely angel from the hands of ate Baby. I wanted to make sure that there was no monkey business involved. I needed to do some investigation. Besides, I wanted to  discuss it seriously  first with my wife.

I then told ate Baby that we will inform her that night about our decision regarding the infant.

My wife was still in bed, probably half asleep, when I re-entered our room. Before leaving, I informed her about the baby. I saw her eyes sparkled in excitement and told me that I should have wakened her up when ate Baby came.

I told her not to make any decision without us talking about it.  Besides, at that time, I was talking to another party regarding a 7-month old baby named Niña. Then I left hurriedly for I did not want to be late for my work.

But as I was having a meeting with my colleagues in the school where I was working, it was almost noontime then, I received a call from my wife. She told me that another party was interested in taking the baby, thus I have to make up my mind. I told her to give me until evening to decide. But she was adamant demanding that I had to decide right there and then.

I tried to figure out how to best navigate around her pressuring me. I  called her back and said that I would leave the decision to her. But, I assured her of my support for whatever she wanted to do. I ended the call telling her that it was my turn to report in the meeting I was attending. The truth is I was already done reporting. Had I not done that, she might have continued talking and we would be coming full circle.

As far as I could recall, she  had never made a major decision. I doubted if she would do so that time.

After a couple of hours, I called my sister-in-law and asked what was my wife’s decision on the baby. To my surprise, she told me that my wife had already brought the baby home.

It was a mixture of emotion that I felt. WORRIED! She made a major decision without us seriously conferring with one another. EXCITED! I felt an inexplicable excitement. There was seemingly a magnet pulling me home. Indeed, it was different because in the past how I wished that I could just stay in the office and work a little longer. But that time, I know that there was an angel at home and I would like to be acquainted with him as soon as possible.

I have not clutched a baby I could call my own for a long time. The last time was when my first son, a love child, was born – many years ago.

On my way home, I whispered a prayer that may He make me and my wife ready for whatever responsibilities and challenges we were about to face.

When I got home, the baby was sleeping under the staircase – in the daybed where I would be lazing off while watching TV in our living room. Seated beside him was my wife, all smiles and so enthusiastic essaying her newfound role as a mother.

I approached them, knelt and gazed at the baby. He had fair skin, softer than cotton. I kissed those rosy cheeks. He reacted and what a wonderful sight I beheld – his skin turned crimson and let out a short shriek as if feeling delighted by what I did.

I visited ate Baby in their house after dinner. She was responsible in bringing the by to our life. For the tremendous joy and my wife were having, I felt obliged to express to her my gratitude. However, I had to tell  her about my reservations.

Firstly, I made it very clear that I don’t like that the parents of the baby live just nearby… definitely not from the same barrio where we live…  It would make our situation, and most especially that of the baby, so complicated if the parents are just around. Lastly, I don’t like that anyone would take advantage of our situation – childless for a long time – and play with our emotions. As it is, the long wait for a child of our own is already emotionally distressing, and if the one given to us will be taken away for whatever reasons there may be, the pain will be much more.

I told her that I could rebound easily from emotional distress stressing that I am a tough hombre. But it was be different on the part of my wife.

For all those, ate Baby  said the magic words – “Trust me.” Then she told me that I need to accompany her the following day to the midwife who attended to the mother of the baby. After that, I went home happily armed with an assurance of a person saying I should trust her.

Many “firsts” happened that evening. There were no disagreements that transpired between me and my wife. We ate happily together. We talked. We planned together. We woke up together to attend to whatever our baby needed. I would say it was a miracle – a miracle that happened because of the presence of an angel. And that was only the baby’s first night with us. We also had a lengthy discussion about how should we call him. We decided to name him MARC ANDREI and his nickname Santino.

I slept approximately a couple of hours only. I could have gone sleepless and I would not complain.

* Ate is a Filipino word which means older sister. The word is usually used by Filipinos to call women slightly older than they are.)