On the Poll That Says “Most Filipinos trust US, not China” – A Case of National Amnesia or Triumph of US Indoctrination? 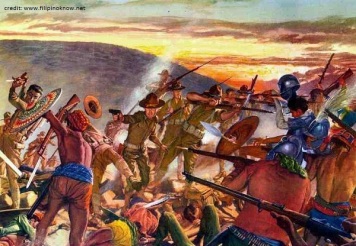 There is something more to that poll that says “most Filipinos trust US, not China” than meets the eyes. It affirms two things. First, Filipinos suffer from a national amnesia and second, the Americans completely succeeded in indoctrinating the people whom then US President McKinley referred to as “savage warriors” and “little brown brothers.1”

Majority of Filipinos trusting the US is a classic case of amnesia. It seems to support the perception that Filipinos tend to have short memory so much so that they easily forget the lessons of history.

Others would dismiss the idea that Filipinos have short memory. It’s just that the Christian in them would make them easily forgive and forget.

But have Filipinos really forgotten the atrocities committed against them by the Americans during the Philippine-American War (1898-1901)?” Or is it a case of them not knowing what really happened.

The world today, even the Filipinos themselves know little (or nothing) about what has been described by historians as the “first Vietnam”, where US troops first used tactics such as strategic hamleting and scorched-earth policy to “pacify” the natives2.

It’s very convenient for people from other countries to criticize Duterte, the Philippine president, for his stance against the Americans. If only they would bother to scan the pages of Philippine history they would know.

Like the Filipinos, the rest of humanity is suffering from amnesia…selective amnesia that is. It’s difficult to fathom why the world chose to remember only the atrocities committed by the Nazis during the Second World War and forget about the wrongdoings inflicted by the US and the other colonial powers upon the people they colonized.

The world thinks that Duterte’s anti-American sentiment stemmed only from the supposed attempt of the president of the US (Obama) to lecture him in an international gathering about the alleged extra-judicial killings in the Philippines. There was more to it… much more than the irony that the leader of a country who massacred thousands of Filipinos, including children and women, would take the moral high ground to lecture about “killings.”

But despite all of the wrongdoings inflicted upon them by the Americans, why then, according to the poll, Filipinos trust the US more than China?

That’s the result of years of American indoctrination.

Education is a powerful tool of indoctrination. Today’s generation of Filipinos are the offsprings of the children taught by the Thomasites (American teachers named after the ship, the USS Thomas, which brought them to the Philippines) to accept their rule. They did not only teach those young Filipinos the three R’s but also indoctrinated them about the greatness of America, its ways, ideas, values, culture3.

The indoctrination of that  generations of Filipinos after the Philippine-American war was a tremendous success. “One look at our society say it all: the preference for American products, the promotion of materialism and hedonism, and a general obsession for all things American. No matter how Filipinos try to deny it, the Americans have succeeded in molding us into their ideal “little brown brothers.4”

The funny thing is Rappler, citing a survey conducted in 2013 by the Pew Research Center, said that “Filipinos like the US even more than Americans5.”

And would it be wrong to presume that none of the history books distributed in Philippine schools during their occupation of the archipelago ever mention about the brutal campaign the Americans waged in the Philippines to pacify the Filipinos?

“Until the lions have historians, tales of the hunt shall always glorify the hunters,” says an African proverb.

President Duterte showing (during the most recent ASEAN meeting held in Laos) photos where US soldiers could be seen posing with  dead Filipino Muslims was just a right thing to do. With that act both the Filipinos and the world were reminded of some basic historical truths about the US.

What basic historical truths are those?

The US did not come to liberate Philippines from Spain but to join the competition for empire among the wealthy and powerful countries of the West and to establish a strong presence in the Pacific that would enable them to protect their economic interests.1 They duped Emilio Aguinaldo, the leader of the revolt against Spain, into believing that they didn’t need any colony. 6

The double-crossing of Aguinaldo was completed when the US concluded with Spain the Treaty of Paris without concurring with the Filipino people.6

The US was not at all benevolent to Filipinos. “The atrocities of American troops included: the torture of suspected rebels; refusing to take prisoners; wholesale massacres of entire villages of men, women and children and starvation resulting from relocating large populations.7”

Worst of all, the new colonial masters extinguished the flames of Filipino nationalism.

When the US decided to flex its muscles in the Pacific by colonizing the Philippines, Filipino nationalism which was struggling to develop was nipped in the bud. That dark period in the history of Filipino people was referred to as the “Era of Suppressed Nationalism6. Advocate independence from the US and the Filipinos would get either death penalty or a long prison term (Sedition Law, 1901). A simple display of the Filipino flag (Flag Law, 1907) would also get them into trouble6.

The young Filipinos today should be given an honest-to-goodness account of what really happened during the American occupation, particularly in its early years. They need to be presented with an objective analysis of the REAL reasons the Americans came, how it affected the development of Filipino nationalism and how their presence shaped Philippine politics.

It’s not to teach them to hate the Americans but for them to become aware of their past and decide whether or not US should be trusted.

Historical awareness will give the young Filipinos a better understanding of their identity. It will enable them to develop a proper perspective in appraising the current state of things in the country.

[5] Filipinos like the U Even More Than Americans Do – PEW Research (Rappler) [Cited 2016 October 2016] Available from http://www.rappler.com/nation/56085-philippines-usa-pew-research.