There Are No Political Dynasties in the Philippines!!! 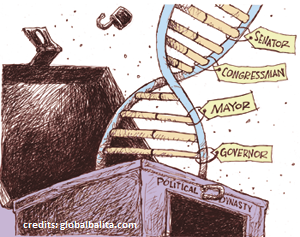 Don’t believe it when they say that the Philippines is a bastion of political dynasties!

Consider this… A politician, let’s say a mayor, can no longer run due to term limits. So, his wife will run for the position he previously held. Then that politician will run for another post…as governor perhaps. Assuming both the politician and his wife win and luckily get re-elected until they reach their term limits, is it the end? Will their thirst for power (and the corresponding  benefits) be finally satiated?

Hell no! The couple will ask their son or daughter (or a grandson…or a granddaughter…or an in-law) to run for the positions they are about to vacate. What about the mother? She will run for the post vacated by the husband-politician. She will run as governor. What about the husband? He will perhaps run either as congressman or even senator. In case all family members win then for years that the power will run circles within the same family. The son (or daughter) is a mayor, the mother a governor and the father either as congressman or senator. When term limits are reached then they will just run for the position that a family member would vacate. Some siblings, and even in-laws, in the family are also occupying minor positions in the geographical units where they reside.

See! There are no political dynasties in the Philippines!

Then of course they will tell the people that they do not belong to a political dynasty…but a family of public servants. Okay! Fine!! Whatever!!!

The same family names…same genes…in the seats of power in the country for decades now. RESULT? Same dismal economic and socio-political performance for the country.

Round and round we’re going circles…DIZZYING! TIRING!