No Love Lost Between the Catholic Church and Duterte 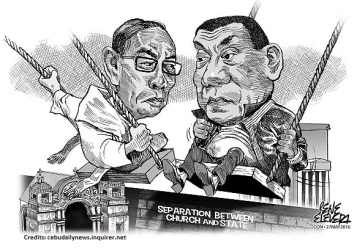 During the campaign period for the May-2016 presidential derby, a few (or is it many or all?) Catholic bishops and priests openly expressed their disapproval of then candidate Rodrigo Duterte. Reportedly, priests used their homilies to dissuade the Catholic faithful from voting for the mayor of Davao City.

Whether the bishops and the priests like it or not, Duterte is the Philippine president for the next 6 years.

Before the May, 2016 elections, Duterte could be remembered saying, “I said let this election be a sort of a referendum, a sort of a plebiscite for the church and me.” And the Filipino people have spoken.

The Catholic Church, by taking sides and for singling out Duterte, initiated the animosity between them and the soon-to-be head of the Philippine government. It can be said that the clergy fired the first shots and they are supposedly wise enough to know that the outspoken Duterte, win or lose, will retaliate. They unwittingly stirred up a hornet’s nest.

For all the verbal salvos fired against him by the bishops and the priests the strongest response by Duterte was “the Catholic Church is the most hypocritical institution.”  He has gone as far as accusing the bishops of not keeping their vow of celibacy. The incoming Philippine president also added that the clergymen sought favors such as cars from politicians.

Duterte threatened to expose what he termed as the sins of the past committed by the Church including priests whom he alleged to have had affairs with women. He even claimed that he was sexually abused by a priest when he was a child.

He urged the Catholic Church to just observe the “separation of the Church and the State” and not meddle with the affairs of the government.

After Duterte’s rants and shocking insults, the biggest church organization in the Philippines started singing a different tune.

Before the May 9 elections, one of the most outspoken among the bishops who attacked Duterte’s candidacy was Archbishop Socrates Villegas. The bishop has a reputation of saying what he needs to say but his response to Duterte’s tirades against the Church could be construed as generally reconciliatory. He said, “Mine is the language of peace that refuses the dark magic of revenge. Mine is the silence of respect for those who consider us their enemies but whose good we truly pray for and whose happiness we want to see unfold.”

But while the Archbishop spoke of the nobility in silence, a Catholic priest (whose name I don’t wish to divulge but he knows I’m referring to him should he get to read this article) continued his attack against president-elect Rodrigo Duterte. The exact words he wrote (as a comment to an article about the incoming Philippine President which he posted on his Facebook) goes, “6 years tau [sic] magtitiis.”

Duterte is yet to serve a day in office but the priest is seemingly certain that the Philippines will suffer during his term.

Can he see the future? Definitely not but one thing for sure the priest knows Philippine history. He knows pretty well that for 333 years, not just 6 years, the Filipinos suffered tremendously in the hands of Spanish conquistadores, aided by the Catholic Church. The priest, I’m sure, have read Dr. Jose Rizal’s “Noli Me Tangere” and  knows one of the characters called Padre Damaso.